What do you think of when you hear US Polo? If you are like me, you probably think of the iconic collared shirts made out of cotton mesh fabric. But behind the clothing brand there is so much more. Let’s get everything straight. 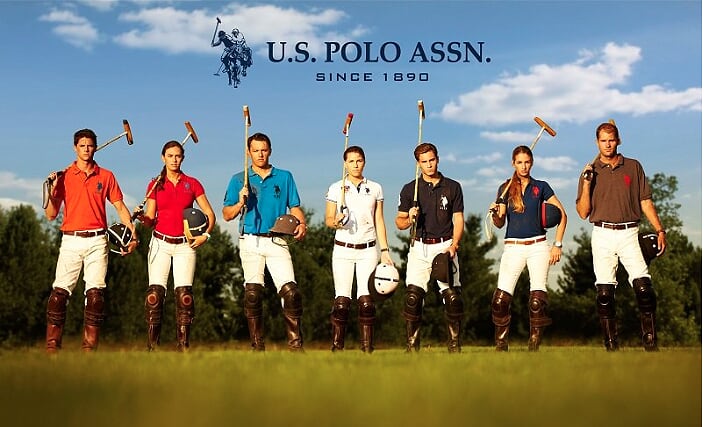 What do you think of when you hear US Polo? If you are like me, you probably think of the iconic collared shirts made out of cotton mesh fabric. But behind the clothing brand there is so much more. Let’s get everything straight.

2 cents about Polo, the sport.

Polo is one of the oldest known team sports, also known as a “Sport of Kings”. Just like in any competitive sport, there are 2 teams with 4 players each. Players are riding atop a polo pony and have a target to score a small ball into the opponent's goal with a mallet. The term 'polo pony' is merely traditional and the mount is actually a full-sized horse. Polo was an Olympic sport from 1900 to 1936. The game lasts between one to two hours. There are several types of the game depending on the location - outdoor, arena, beach even ice polo, or depending on the mount - camel, canoe, yak, bike polo, etc.

The game originated in the Central Asian region and was played by Persian Royalty, men and women alike. Later it spread to China, Iran, Pakistan and other nearby countries, including India where in the region Manipur the game was shaped into somewhat closer to its modern version. From India it found its way across the Europe played by British Military men. From there the game traveled all the way to Argentina with the British settlers. It became a huge hit and spread around the country rather quickly.

The first ever polo game in the US happened on May 16, 1876. It was organized by James Gordon Bennett Jr. at Dickel's Riding Academy in New York City. He also established the first Polo Club called Westchester Polo Club.

The History of the USPA.

The USPA was established 14 years after the first game in 1890. The first chairman of the USPA was H.L. Herbert (1890-1921).The need was urging as there were already 4,500 individual members and 250 polo clubs across the U.S. and Canada who needed a leader organization to provide support and resources.

In order to train new players a number of programs were created and Regional Polo Centers and clubs were opened. These facilities and programs served both professional and amateur players.

Since the first game took place in New York, it was only logical that the USPA headquarters shall be housed there. As a non-profit, the USPA was calling for volunteers to join the committee and it carries the same structure today with an addition of a small office staff. All Officers and Governors are appointed by Committee Members for a year.

Everything started with just seven clubs under the association with five more joining in within a year. All the members saw an overall improvement with new training structure , new rules and regulations implemented by the association.

Interestingly enough, the time between 2 World Wars was when Polo experienced its greatest upswing. It continued to grow not only within the US but the sport started gaining weight in other countries too. USPA had to coordinate 88 clubs and nearly 3000 members. At that point , less than a half of players were of the military origin and more “civilians” joined in. A ten-goal player Louis Stoddard was navigating the organization at that important time between 1922 and 1936.

With the beginning of World War II both men and horses were needed at the battlefield and there were no tournaments hosted between 1942 and 1945. After the war, however, game returned to the country.

The USPA continued doing a great job supporting the sport and in 1988 polo members felt a need to recognize the best players and their achievement. Museum of Polo and Hall of Fame was founded by four polo players, H. Jeremy Chisholm, Philip L. B. Iglehart , Leverett S. Miller, and George C. Sherman, Jr. in Lexington, Kentucky where it remained till 1997. It outgrew the place and moved to a ten-acre estate in Lake Worth, Florida.

In 2010, the USPA created Team USPA to kick things up a notch. The sole purpose of the organization is expanding and growing the sport of polo in the U.S. Hence, they started involving young, talented American players . W ith proper coaching and playing opportunities they will be able to become higher rated amateur and professional player s . Focus on the youth is very strong and USPA also set up a Pony Club to coordinate youth polo programs and competitions.

In 2012, CBS News released a “60 Minutes Feature on Polo” to increase the interest and the common knowledge of the sport. The segment highlighted one of the USPA’s specialty programs, Work to Ride, which is dedicated to helping inner-city youth in Philadelphia through polo and other equine activities.

This noble sport has always been a symbol of elegance, spirit and power, unity of the player and the mount as well as the 4 players on the team. At the beginner stage of its development, the sport required a lot of guidance and leadership. That was the reason the United States Polo Association was created out of love for sport and desire to make it better, safer and more enjoyable for both players and spectators. They wanted to spread the word and give the opportunity to young talents to find a path into this sport that initially may seem out of reach.